Meeting of the Ombudsmen of the Visegrád (V4) Countries

The Ombudsmen of the V4 (Visegrád) countries have met on an annual basis since 2004, in order to share the experience of the previous year, to discuss their achievements and the challenges posed by their activities, as well as their work conditions. The topics of the meetings are defined by the commissioner acting as the host of the annual event, thus the special features of his or her own practices are reflected in this choice. The Slovakian commissioner recommended the topics of educational segregation, child protection systems, homelessness and the right to housing, as well as damage caused in administrative authority as the agenda points of this year’s meeting.

The problems of the four participating countries, and also, their legal systems are similar as a result of their common history and their social and economic conditions. All this, and the EU laws largely define and also, make familiar the tasks, conditions and future of the Ombudsman’s activities of the V4 (Visegrád) countries. Thus, there are some fields of law and situations for which commonly proposed solutions can be identified for the Ombudsmen, and these can be communicated to each other through close cooperation, keeping regular contact, as well as the continuous sharing of best practices and methods of investigation.

However, the issue of funding the Ombudsman’s offices is brought up at the V4 Ombudsmen’s meetings more and more often as well. This includes, among others, the lack of a coordinated system of financial support provided to the Ombudsman’s offices of these countries, sometimes the reduction of such support amounts, or missed staff increase actions, which would be adjusted to the tasks and which are deemed necessary. The number and role of non-governmental organizations have conspicuously decreased in the past few years, which is contrary to the European tendencies, and all this makes it more difficult to channel the citizens’ complaints and to apply the individual tools of Ombudsman’s offices and similar institutions (such include, among others, the shaping of social attitudes, sensitization, as well as the monitoring of judicial case law), as was mentioned at the meeting.

Elisabeth Sándor-Szalay talked about the tendencies of educational segregation in Hungary, as well as the possible ways of desegregation. In her assessment of the situation, she mentioned the achievements and limitations of state involvement, as well as the necessary future tasks of the state in this respect. Among others, the need for the rehabilitation of declining regions, the experience gained from public work, the rather complex task of anti-segregation action that affects several walks of life (including, for example, housing, child protection, a healthy environment) were listed here, which point beyond the ordinary tasks but which constitute a complex unity with these. The lack of qualified experts was mentioned as a key problem, and the role of churches and the situation of Roma women were highlighted too. 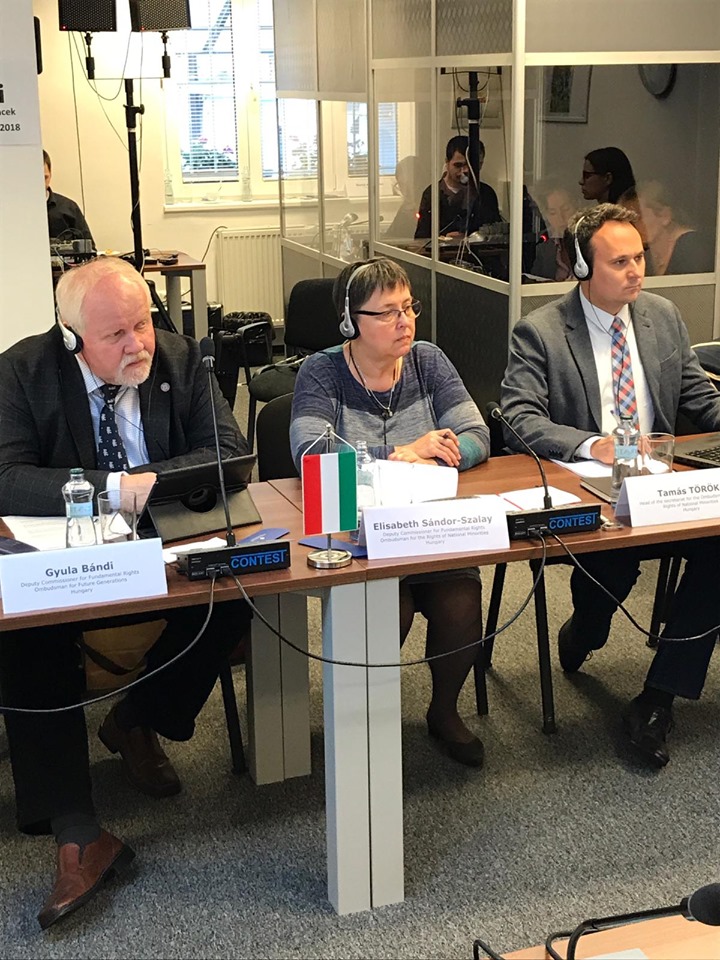 Deputy Commissioner for Fundamental Rights, Ombudsman for Future Generations Gyula Bándi, related to damage caused in administrative authority, said that the Act on the Commissioner for Fundamental Rights (Ajtv), which regulates the operation and competence of the Commissioner, provides considerable protection to the Hungarian system of commissioners, as opposed to the situation of the other Ombudsmen of the V4 countries. Such protection involves immunity, inviolability, and also, that no legal remedy is available during the procedure. The Deputy Commissioner emphasized the importance of the professional well-foundedness of the inquiries, as well as the need for a thorough collection and categorization of evidence.

As regards homelessness, Senior Legal Advisor of the Hungarian Ombudsman’s Office Péter Stánicz gave a report on the usual annual winter crisis inquiries, the condition of and changes in the social welfare system, and he pointed it out that in the Commissioner’s practice, respect for independent living, the right to personal autonomy and human dignity are regarded as key standards.

As part of the agenda point on the challenges and possibilities related to the child protection systems and the foster parent’s status, the senior legal advisor, among others, mentioned the kinds of difficulties that exist in the child protection signaling system, and also, what the protraction of the guardianship procedures, instances of sexual abuse in children’s homes, the lack of qualified teachers and the low salaries of the staff involve. The experience on reintegration into the family and adoption are also the subjects of the investigations of the Ombudsman.

The Ombudsmen of the V4 countries also issued a memorandum on the occasion of the thirtieth anniversary of the United Nations Convention on the Rights of the Child, in the center of which is the idea on raising children in families and the importance of the right to education.

You can find this memorandum here.